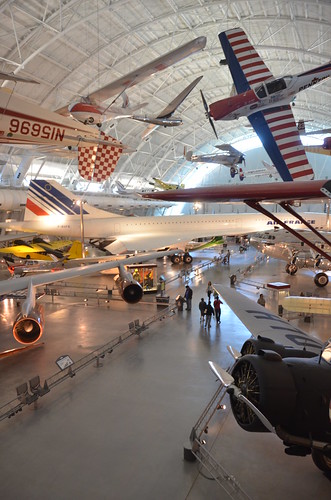 The first supersonic airliner to enter service, the Concorde flew thousands of passengers across the Atlantic at twice the speed of sound for over 25 years. Designed and built by Aérospatiale of France and the British Aviation Corporation, the graceful Concorde was a stunning technological achievement that could not overcome serious economic problems.

In 1976 Air France and British Airways jointly inaugurated Concorde service to destinations around the globe. Carrying up to 100 passengers in great comfort, the Concorde catered to first class passengers for whom speed was critical. It could cross the Atlantic in fewer than four hours – half the time of a conventional jet airliner. However its high operating costs resulted in very high fares that limited the number of passengers who could afford to fly it. These problems and a shrinking market eventually forced the reduction of service until all Concordes were retired in 2003.

In 1989, Air France signed a letter of agreement to donate a Concorde to the National Air and Space Museum upon the aircraft’s retirement. On June 12, 2003, Air France honored that agreement, donating Concorde F-BVFA to the Museum upon the completion of its last flight. This aircraft was the first Air France Concorde to open service to Rio de Janeiro, Washington, D.C., and New York and had flown 17,824 hours.

The Smithsonian’s National Air and Space Museum welcomed today (Aug. 6) the sole surviving Boeing S-307 Stratoliner to its new home when the silver pioneering airliner arrived at Washington Dulles International Airport in Virginia for display at the museum’s new Steven F. Udvar-Hazy Center. The museum’s companion facility, adjacent to the airport, opens to the public Dec. 15.

The luxuriously appointed Stratoliner, built in the late 1930s, was the world’s first passenger airplane to be pressurized, allowing it to avoid rough weather by flying at unprecedented altitudes (20,000 feet) for transports of the era.

The airplane has been in the museum’s collection since 1972 but because of its size and weight could not be displayed at the museum’s flagship building on the National Mall. A team of volunteers and Boeing staff performed extensive restoration work on the airplane in Seattle.

"Visitors to the Udvar-Hazy Center will take one look at this airplane and be transported back to a glamorous age when the world became smaller for the traveler who required speed and luxury," said Gen. J.R. "Jack" Dailey, director of the National Air and Space Museum. "We are indebted to the Boeing restoration team for turning back the clock on this beautiful aircraft."

The Stratoliner arrived in Northern Virginia following an appearance at the Experimental Aircraft Association’s annual Fly-In at Oshkosh, Wisc. The airplane flew from Allegheny County Airport near Pittsburgh, where it landed August 5th because of bad weather.

With a wingspan of 107 feet and a cabin nearly 12 feet wide, the Clipper Flying Cloud will be exhibited at ground level in the Udvar-Hazy (pronounced OOD-var HAH-zee) Center aviation hangar.

The Clipper Flying Cloud was delivered to Pan American Airways with two others in 1940. The aircraft carried 33 passengers and a crew of five. The Pan American Airways airplane was reconfigured to seat 45 passengers. Stratoliners included space for berths for overnight travel; paneling in the cabin and lavatory; wall fabric featuring the Pan Am logo, world map and exotic animals; and eight divans.

The Clipper Flying Cloud began service flying Caribbean routes for two years. During World War II, it flew in South America under the direction of the U.S. Army Air Forces. In 1946, it made daily runs between New York and Bermuda. Throughout the next two decades it passed through the hands of several owners, and once served as a presidential plane for the notorious Haitian leader "Papa Doc" Duvalier. After its Haitian sojourn, the Clipper Flying Cloud landed in Arizona.

In 1969, a visiting National Air and Space Museum curator spotted the airplane in Arizona and immediately recognized its historic significance, even while its then-owner planned to convert it into a fire bomber. The Smithsonian subsequently acquired the aircraft and later made arrangements with the Boeing Company for the restoration, dubbed "Operation Flying Cloud," at the Seattle plant where the Stratoliner was originally built.

Boeing technicians and former Pan American employees voluntarily spent six years completely restoring the Stratoliner before it made an emergency landing in Elliott Bay in 2002. Since then, the restoration team has performed additional work so that visitors to the Udvar-Hazy Center will have the opportunity to view the aircraft as it looked the day it rolled off the assembly line more than 60 years ago.

De Havilland originally designed the Chipmunk after World War II as a primary trainer to replace the venerable Tiger Moth. Among the tens of thousands of pilots who trained in or flew the Chipmunk for pleasure was veteran aerobatic and movie pilot Art Scholl. He flew his Pennzoil Special at air shows throughout the 1970s and early ’80s, thrilling audiences with his skill and showmanship and proving that the design was a top-notch aerobatic aircraft.

Art Scholl purchased the DHC-1A in 1968. He modified it to a single-seat airplane with a shorter wingspan and larger vertical fin and rudder, and made other changes to improve its performance. Scholl was a three-time member of the U.S. Aerobatic Team, an air racer, and a movie and television stunt pilot. At air shows, he often flew with his dog Aileron on his shoulder or taxied with him standing on the wing.

Gift of the Estate of Arthur E. Scholl